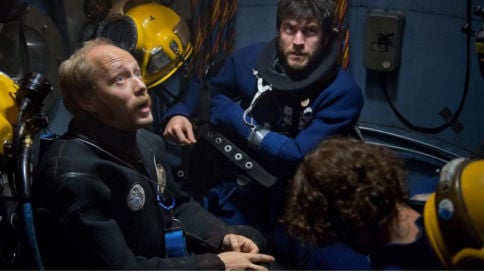 A still from the film Pioneer, based on the experiences of the first generation of North Sea divers. Photo: Pioneer
The court ruled that Norway's authorities had violated their right to a private and family life — Article 8 in the Human Rights Act —  by failing to provide them sufficient information on the health impacts of the rapid decompression used in their dives.
"We regard this as a full victory," Eyvind Mossige, the lawyer who represented the seven divers, told Norway's state broadcaster NRK. "The most important point is that the divers did not get the information on the danger they faced.”
The seven divers, five of whom were Norwegian, one Swedish and one Icelandic, claim to have suffered serious health problems, such as lung disease, encephalopathy, reduced hearing and post traumatic stress disorder (PTSD), as a result of the dives they undertook from 1960 up until the 1980s.
They put this down to short-cuts taken and the safety standards waived by the diving companies that employed them.
The companies, keen to gain a competitive advantage over their rivals regularly extended the maximum period of a "saturation dive", and reduced the time given to divers to decompress, meaning many suffered the decompression sickness known as 'the bends'.
"It's true. I didn't have a chance to understand the risks, because I'm not a doctor," Dag Vilnes, who claims he suffered permanent spine and brain damage after a serious case of the bends in 1977, told The Local. "I thought it was safe when the state said it was safe. I had to believe them."
The Norwegian government, although recognizing a moral duty to compensate the divers, has always refused to accept legal responsibility.
In 2009, the divers lost their case at the Supreme Court, and so appealed to Strasbourg.
The court ruled that Norway had to pay each of the divers €8,000 ($10,878) in damages, as well as covering Vilnes's €40,000 ($54,392) legal costs and the combined €50,000 ($67,990) legal costs of the other six divers.
Vilnes said the court's ruling gave him "a small opening" to pursue further damages in Norway. "It's been a long march, ten years or more in courts," he said.
The divers' plight has gained more public support since the hit film Pionér (Pioneer) was released in the summer, which highlighted the dangers the first generation of North Sea divers faced.