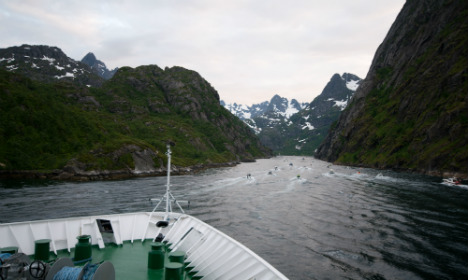 Public broadcaster NRK has replaced some of its usual prime time drama and entertainment with long, lingering images of cruise liners touring fjords and hours of crackling log fires.

With up to 134 hours of uninterrupted footage, this snail-paced entertainment has become something of a Norwegian speciality.

"It's literally reality TV: something authentic that's shown in real time without being edited down," said Rune Moeklebust, head of programs at NRK.

The concept was pioneered in 2009, coinciding with the centenary of the Bergen railway line. The route passes through breathtaking scenery, connecting Norway's second city with the capital Oslo.

The train trip — all seven hours and 16 minutes of it — was filmed with onboard cameras and archive footage was added to fill in some of the duller moments as the train passed through long, dark tunnels.

The idea was original, easy to produce and soon embraced by the public broadcaster, unconstrained by commercial  considerations.

It decided to air the experiment on one of its two national channels… to a roaring success.

About 1.2 million viewers, nearly a quarter of the population of Norway, tuned into NRK2 for at least part of the trip.

"When I asked a few days later if I could borrow the airwaves for five and a half days to broadcast live from the Coastal Express (a cruise liner touring the Norwegian coast) I was told 'yes, of course'," said Møklebust.

The formula, again, was a resounding success — 3.2 million television viewers watched parts of the trip as hundreds of onlookers flocked to see the ship in various ports.

Norway's royal family even featured as Queen Sonja waved regally from the deck of the royal yacht, as the two ships crossed paths.

The slow-moving saga was like a drug for some, including 82-year-old Knut Grimeland stayed glued to his television for days on end.

"It's hard to say how many hours I slept, but not many," he told NRK.  "I dozed a little on the sofa from time to time but I didn't make it to bed for five days."

Others forgot they were not actually on board.

When the Bergen-Oslo train chugged into its final destination, one viewer said he grabbed the curtains in his living room, looking for his suitcase in the train compartment.

Mesmerising  voyages are not the only "slow" treats being offered to Norway's TV audiences.

NRK airs shows on salmon fishing, knitting , the intricacies of making the perfect log fire and many other themes.

The recipe is simple: a long introduction with historical background then an even longer examination of the activity from beginning to end. A show on knitting, for example, goes from sheep shearing straight through to the final stitch on a jumper.

"Slow TV attracts all categories of the population: young people intrigued by the novelty and strangeness of it, and older viewers who find the topic or voyage interesting," said Møklebust.

Some see it as a welcome respite from an increasingly hectic society.

"When most stations are opting for the same program formats, it's tempting to dive into a niche that goes against the grain," said Arve Hjelseth a sociologist at the Norwegian University of Science and Technology in Trondheim.

"Slow TV is a chance for people to sit down, relax and contemplate."

It may, however, take some time before the concept takes off elsewhere.

When the Coastal Express was sold to the US the epic voyage was slimmed down to a one hour show about the Slow TV concept.

And while it may be a smash hit with millions of Norwegians, it's not to everyone's liking.

"It's incredible that the public can sit and stare at this for hours," said Trond Blindheim, an outspoken critic and principal of the Oslo School of Management.

"Most people watch idiotic TV… I'm literally incapable of saying anything sensible about people who are glued to TV sets watching the bow of a ship and people on a shore waving their arms about."

But NRK sees a bright future for the genre and Møklebust is not one to put limits on creativity.

He is now toying with the idea of a program dissecting the concept of time — from the making of a clock to, well, just the passing of time — minute by minute, hour by hour.

"When someone tells me you can't show that on television I take it as a sign: it means I'm on to something," he said.