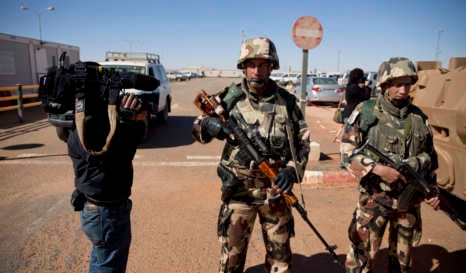 Soldiers at the In Amenas gas facility after the tragedy in January - Tore Meek / NTB scanpix
Brian Bjordal, managing director of the country’s gas network operator Gassco, told Reuters on Thursday that he planned to decide on new security measures “before Christmas”.
“It is … a question of the physical, detection systems, cameras, other kinds of sensor systems so that you can actually detect very fast what the threat is, as quickly as possible,” he said.
Earlier on Thursday he told an industry conference in Oslo that the tightened security measures were “motivated by In Amenas and July 22”.
On July 22nd, 2001, Anders Breivik planted a car bomb in central Oslo that killed eight, and then gunned down 69 people at a youth camp on the island of Utøya.
In January this year 40 workers, five of whom were employees of of Norway’s Statoil, were killed when Islamist militants raided the In Amenas gas plant in the Sahara desert.