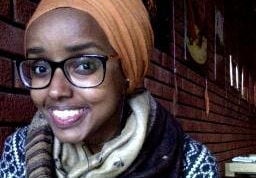 Warsan Ismail - Twitter
The hashtag, which means "Norwegian racism", became the country's most trending topic on the micro-blogging service on Monday, according to the Twitter monitoring service Trendinalia.
Warsan Ismail, a 23-year-old medical student of Somali origin, said she had never expected such a response when she started the tag.
"I'm as surprised as everybody else," she told The Local. "I suppose that many people with minority backgrounds realized that they had an opportunity to share their stories."
Ismail wrote about how she had returned from nursery school to find her mother surrounded by police. The family's neighbours had set their dogs on her, before hurling racist abuse at her.
"Luckily, the severe incidents are very rare," she said of racism in the country. "But I've experienced a lot of non-severe incidents, especially when people are a bit drunk when they get out of the subway and start asking where you come from. Just because you're drunk doesn't mean you can get racist."
She said second generation immigrants like her generally found it easier to get by in the country.
"I'm lucky, I'm young. I'm fluent in Norwegian and I've lived here all my life. But my impression is that the less time you've lived in Norway, the less fluent you are in Norwegian, the more often you will meet prejudice."
She said that the response showed that Norwegians were not afraid to discuss the problem of racism in their country.
"What's surprising is that many people who are ethnic Norwegians also shared stories from people in their circles who have uttered racist comments."