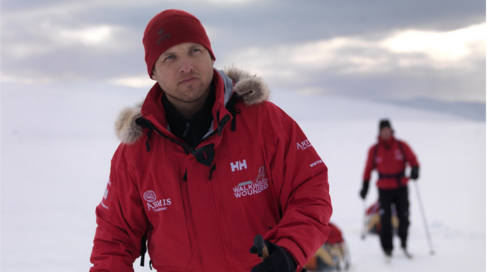 Inge Solheim - Helly Hansen
Solheim and the Prince arrived in South Africa on Monday en route to the Russian Antarctic base of Novolazarevskaya, where the 335 km-long ski trek will begin.
The expedition, which is organised by the charity Walking With The Wounded, starts on December 1st and is expected to take 16 days.
Solheim is leading a team of wounded US servicemen, which also includes the Swedish actor Alexander Skarsgård.  Prince Harry is on the British team. A third team of Australian and Canadian servicemen is being joined by Dominic West, the British actor who stars in The Wire.
All three teams include four wounded soldiers, a celebrity, and an experienced polar guide.
“Part of the point is to help people into new careers,” Solheim said. “They have experienced a lot and may have been shot to pieces.There are a lot of suicides among this group, as well as alcoholism and self-medication. But there are also a lot of very gifted people.”
Prince Harry said last week that the wounded soldiers on the expedition were about to achieve something “remarkable”.
“In doing so [they] will prove to everybody else that even though you’ve lost a leg or lost an arm… that you can achieve pretty much anything if you put your mind to it,” he said.
“This trip is another way of reminding everybody that as Afghanistan draws down and these guys aren’t in the news any more… the support must continue.”
On December 14th 1911, the Norwegian Roald Amundsen became the first explorer to reach the South Pole, beating the rival UK team led by Captain Robert Scott by five weeks.
On their return journey, Scott and team all died from exhaustion, starvation and extreme cold.