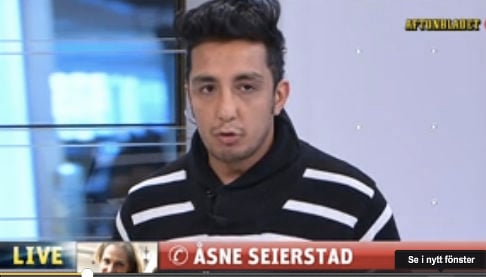 Ehsan Fadakar debating the article with Norwegian journalist Åsne Seierstad - Aftonbladet TV
"It's like Anders Behring Breivik never happened," Ehsan Fadakar, a columnist for the Swedish tabloid Aftonbladet, claimed, before laying into Norwegians' racist attitudes.
Fadakar described the Progress Party, which entered government for the first time last month, as "the mass murderer's favourite gang", arguing that its politicians regularly use "Breivik-style rhetoric" that in Sweden would only come from the far-right Sweden Democrats, while its leader has called to bus the Roma back Eastern Europe.
"The richest country in the world treats the poorest people in Europe like animals," he wrote.
He mocked calls to preserve Norwegian culture, arguing that there wasn't much worth preserving.
"The Norwegians haven't exactly made a name for themselves as hard-working, smart or innovative world conquerors," he wrote.  "Becoming rich from oil is like winning the lottery. Before oil, the country was poor. After oil, the country has money, but not much more than that. No Ikea, Ericsson or Nokia."
Norwegian commentators immediately hit back, with Anders Giæver from VG accusing the Swedes of wartime Nazi sympathies.
"Fadakar is very proud of Ikea," he wrote. "Ingvar Kamprad was a member…of the Swedish Nazi party during the war. A war in which Sweden in general remained 'neutral' while the neighbouring countries were occupied by the Nazis."
"In Sweden, the nobility hung out with Nazi leaders, while opposing Danes and Norwegians were sent to concentration camps.
"Sweden has had a persistent problem with the Nazis since the war. As recently as September hundreds of neo-Nazis…marched through the streets of Stockholm."
Åsne Seierstad, the journalist who wrote the Bookseller of Kabul, said that Fadakar's article was based on disjointed facts pulled from the web.
"I wonder if he has ever been here," she wrote. "Aren't the kind of generalizations that Ehsan uses precisely what lead to xenophobia?"
Fadakar retorted that he had been to Norway many, many times and consistently found it more racist as a country than Sweden.
"Everyday Racism is more prevalent there than in Sweden," he said. "Using the word 'negro' is common, so common in fact that the chairman of the Norwegian Language Council went out only yesterday and tried to explain that some people might take offence. It's 2013!"