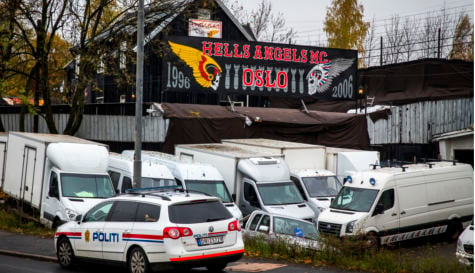 Police raid the Hells Angels clubhouse in October - Erlend Aas / Scanpix NTB
"There has been a lot of publicity around the motorcycle community, and we have received a lot of criticism for being closed. So now anyone curious can come and see what we do here," the group's Norway spokesman Rune Olsgaard told Aftenposten.
"You will have the opportunity to look around, and since it's Christmas, we will probably serve mulled wine and ginger biscuits too," he said.
Police discovered three handguns and an assault rifle when it raided the Club House in 2010, and eleven more illegal weapons in another raid in 2011.
The clubhouse played a part in the Great Nordic Biker War between the Hells Angels and the rival Bandidos gang that played out across Scandinavia and Finland in the mid-1990s.
On October 30th, a car bomb exploded outside it, possibly in revenge for an attack on a group of Bandidos members as they arrived at Oslo's Fornebu airport earlier that year.