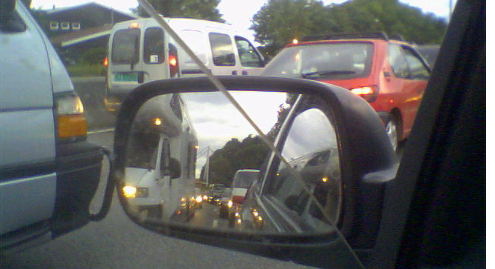 A traffic jam outside Oslo - Kristin Kokkersvold
"Toll rates differentiated by the time of day are one of several intelligent ways to reduce car use," Marianne Borgen, a politician from the Socialist Left Party, told Aftenposten ahead of announcing the scheme.
The Socialist Left party has long pushed for a congestion charge, despite the measure being ruled out in a 2010 infrastructure deal between all the other major parties on Oslo's city council.
Nora Fjelldalen, the leader of the party in Oslo, said that the success of congestion charging projects in the Norwegian city of Kristiansand and Stockholm, combined with Oslo's worsening traffic problem, made it a good time to try and bring in the policy again.
"Now we think that the situation is very serious, the queues are just getting bigger and bigger, and we feel that this is the time to raise this debate again," she said.
"In Kristiansand, they started with a charge in September, and already now they can see that traffic has been reduced, so that is one of the reasons why we have been inspired to do this now.  Stockholm has also done this with good results."
Carl Hagen, the Progress Party grandee who serves as deputy chairman of the transport committee, said he would seek to block the proposal.
"There is no room for a big increase in the number of public transport passengers during rush hour," he said.