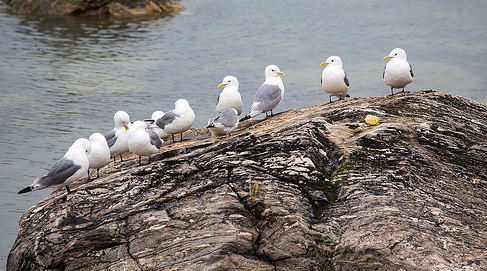 Kittiwakes in Svalbard - Smudge 9000 Flickr
The study, carried out by researchers at the Norwegian Polar Institute, the Norwegian Institute for Air Research (NILU), and the green consultancy Sweco,  found high levels of CPs in samples of blood, eggs and tissue taken from polar bears, seals, kittiwakes, Arctic gulls, Eider ducks and cod.
"Mammals that eat prey with toxins in them will eventually have higher pollutant levels than their prey had, and the concentration of pollutants therefore becomes higher and higher the further up the food chain you go," said Eldbjørg Sofie Heimstad from NILU.
CPs are primarily used in industrial lubricants, such as cutting fluids, but are also used in some commercial paints, adhesives, sealant and caulks.
They are absorbed into the fatty tissue of animals, and have been shown to be toxic to many aquatic organisms and  carcinogenic in rats.
A global ban on some types of CPs is being considered under the Stockholm Convention on Persistent Organic Pollutants.
Tine Sundtoft, Norway's environment minister, described the report's findings as "serious".
"Pollution is a global challenge and international regulation in line with research is required to remove harmful substances from the market," she said.