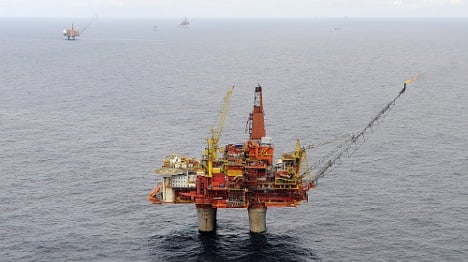 Oil Rig Statfjord B - Harald Pettersen Statoil
The result, about the same as a year ago, compares with forecasts by analysts polled by Dow Jones newswires who had broadly expected a net profit of 11.67 billion kroner.
The company said in a statement that the quarterly results had benefited from a $2.65-billion transaction with OMV.
But the results had also suffered from impairment losses related to refinery activities, reflecting lower margins and a challenging outlook.
Adjusted earnings were stable at 40.4 billion kroner after a 1.0-percent increase from last year's 40.0 billion kroner, whereas revenues grew by 2.0 percent to 169.8 billion kroner.
"We are producing as planned, and maintain our production guidance for 2013," chief executive Helge Lund said.
Oil prices in kroner have increased by 4.0 percent in a year, whereas the price of gas has dropped by 9 percent.
Statoil produced in the third quarter 1.85 million barrels of oil equivalent (boe) per day compared with production in the same period of last year of 1.81 million boe per day.
The group does not expect this year to attain the production levels of 2012, of slightly more than 2.0 million boe per day.
But it forecast a rebound in the coming years, the long-term objective for 2020 fixed at more than 2.5 million boe per day.
In the third quarter, Statoil welcomed the Bay du Nord discovery off Canada, the world's largest oil discovery this year, with between 300 million and 600 million barrels of oil recoverable.
The Norwegian state holds 67 percent of the shares of Statoil, which expects to complete about 60 exploration wells in 2013, with an overall investment of about $19 billion in exploration for the entire year.