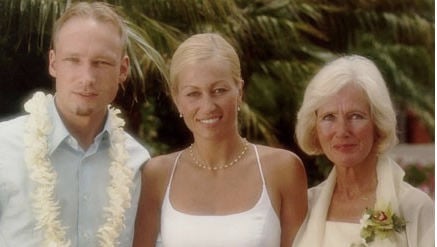 Wenche Behring Breivik (right) with Anders Behring Breivik (left) at her daughter's wedding
"We're considering what to do right now," said Hans Marius Graasvold, who was appointed by Breivik shortly before her death in March.
"There are two alternatives, we can go to court and try to stop the book, and if we need to do that we need to do it within a week. Other than that, we'll just have to wait and see."
The book, by veteran journalist Marit Christensen, draws on a series of secret interviews carried out with Wenche Behring Breivik in the months following her son's terrible attack.  It also draws on entries from her private diaries, which she passed over to the journalist.
"Initially Ms Breivik had a very good relationship to Ms Christensen. She perceived her as being willing to write a book that carried Ms Breivik's voice," Graasvold told The Local.  "But after a while Ms Breivik realised that this wasn't the case and that Ms Christensen was about the write a book as a journalist, about how she herself saw things.
"Breivik was very interested in letting the world see how she saw things, but when she realised that wasn't possible through a collaboration with Ms Christensen, she ended it."
Graasvold refused to divulge whether Ms Breivik had left funds to pay for the legal action before her death.  He conceded that the death of his client raised legal issues.
"The question of whether we can go to court representing a dead client is something for the court to decide".