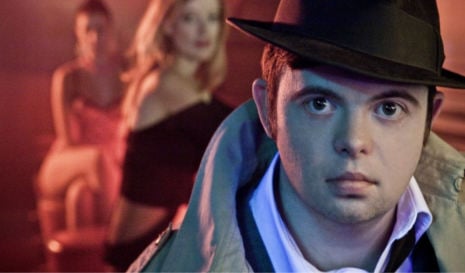 Svein André Hofsø as detective Robert Bogerud
The film's leading man Svein Andre Hofsø, who himself has the condition, last month won the best actor award at Fantastic Fest, a Texas film festival.
"We are now negotiating with two US companies, with the proviso that the agreement will only be realized if they manage to find the right actor to tackle the role," Asle Vatn, the film's producer told Aftenposten.
He said the company's were offering "a significant amount" and planned to turn the film into a television series.
The film's premiere took place on Wednesday night in Oslo's Klingenberg cinema and it will be released across the country on Friday.
It took Hofsø over a year to prepare for the role, doing weight training, cardio exercise, dance training, as well as the intense acting coaching required for him to perform his role to perfection.
He told the newspaper that he had thoroughly enjoyed the process.
"The film shoot in the Czech Republic was an adventure. Working on this film has really changed my life," he said.
The film was directed and written by Bard Breien, who made his name with 2007's The Power of Negative Thinking.
Down's syndrome, a genetic disorder caused by an extra chromosome, leads to severe intellectual disability, with Down's adults typically having an IQ of around 50, although some may have an IQ of up to 70.