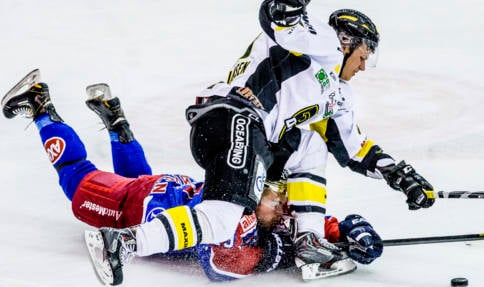 Tommy Kristiansen (top) during a match with the Vålerenga team earlier this month - Stian Lysberg Solum / Scanpix NTB
"I got called 'gypsy kid' and 'fucking gyppo' throughout the match. It was pure racism," Tommy Kristiansen, a player for the Stavanger Oilers told Fredrikstad Blad.
Kristiansen walked off the ice before the game was finished, deciding that he would not allow himself to be abused on account of his background.
"They know that I come from a gypsy family, and invective rained  down on me throughout the game. It's sad, hurtful, and it does not belong in Norwegian hockey," he told the paper.
Trond Magnussen, the chief executive of the opposing Stjernen team from Fredrikstad said he would to apologise in person to Kristiansen for the behaviour of his team's supporters.
"Racism has no place in either the Stjernen stadium or in Norwegian hockey," he said. "Supporters should concentrate on cheering on their own."
Paul Haukali Higson, the Stavanger Oilers' general manager, said that the team had submitted a report on the incident to the Norwegian hockey federation, and expected them to recommend a solution.
"I think it's more of a local problem. Racism is not a big problem amongst Norwegian fans, not in football and not in hockey," he told The Local. "Tommy said he's heard it before at the same rink, but not to the same extent as on Sunday."
The National Hockey League in the US has had frequent problems with racism, with Wayne Simmonds, one player, having a banana thrown at them, and, and another Joel Ward, being called a 'nigger' by fans of opposing teams over Twitter.