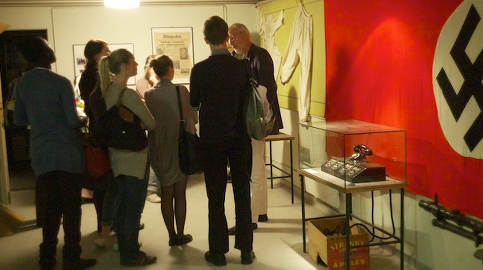 The bunker under Handelsgymnasium - Walther Rathenau Schule
Øyvind Skarlund, the former head of history at Oslo's Handelsgymnasium, has been fascinated by architectural plans of the tunnel network ever since the school was given the keys to a Nazi bunker in its cellar in 2000.
"The plan is to investigate if the tunnels really are there. That's the first thing," he told The Local. "I've seen the plans for the tunnels from the war years, and I've also seen the plans for the bunker, and it seems likely that there is a second bunker underneath the one we have."
The Handelsgymnasium building, in Oslo's West End not far from the Royal Palace, served as the German military headquarters during the war years, and a large bunker was built beneath it.
The Norwegian military kept control of the bunker, which lies just four metres beneath the school, until 2000, when the school turned it into a memorial museum of the country's Nazi occupation.
Skarlund, and his supporters at Gimle Rotary Club, have now raised 200,000 kroner ($30,000) to fund the geo-radar project, which will be carried out next month by experts from the University of Tromsø.
"If we can discover a tunnel over to the KNA Scandic Hotel, we think we can get more money to try and find the tunnels that we think are going down Cort Adelers Gate," he said.
He admitted that it was possible that the plans he has seen were for a tunnel network that was never built.
"On the other hand, it seems likely that they would want to have escape routes, and over to the bunker at the KNA Hotel is only 20 metres, and then down the street to the next bunker is only 100m, and the next one is only 100m, so we can't skip the idea."