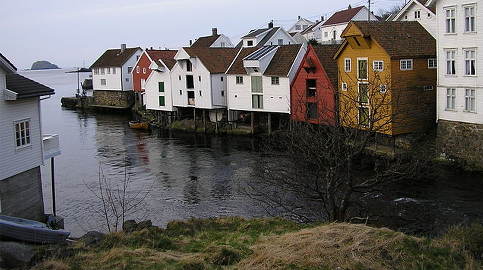 Sogndalstrand, a picturesque fishing village near where the bottle washed up - Mike Norton
A message in a bottle thrown into the sea by a 12-year-old girl in Cornwall has washed up nearly twenty years later on the southern coast of Norway.
The message was found by Johnny Kurt Håland and his wife, from Hauge in Sokndal.
"My wife and I went for a walk a few weeks ago. We live on the south-west coast of Norway and like to go for walks along the coast. This day we went right out to the ocean to enjoy the day. Between some rocks we saw a bottle with something in it. It was a message in a bottle."
The letter was faded after its long years bobbing around the coast of England and Scotland, and then across the North Sea.
But most of it was clearly decipherable.
It read:
"Dear friend. My name is Lucy Elliot and I am 12 years old.
I was born 1982 and I have brown thick wavy hair. Please write to me if you receive this letter.
I live in England, Coventry. I threw this letter out to sea from [unreadable]. The date today is the 19th September 1994.
My address is: Ferrers Close, Tile Hill North, Coventry. I have 2 cats, 1 brother. Please write back. From a bored 12 year old girl."
Ms Elliot, 31, clearly remembered throwing the bottle into the sea, while she was on holiday in Looe, Cornwall.
"I can remember writing the letter like it was yesterday," she told the Daily Mail. "I had lost my bracelet and was pacing up and down the beach trying to find it. I got bored eventually so decided to write this message in a bottle and threw it into the sea. When I heard it had been found all the memories of that holiday came flooding back, it really makes you reflect on the past 20 years."
‘A lot has changed since then, I’ve moved to a village in Northamptonshire which is a far cry from a flat in Coventry but I still have the wavy brown hair."
Ms Elliot now plans to return to Loow with her daughter Eden, 13,and son Archie, eight, to repeat the exercise.
‘Who knows, in 20 years’ time someone might find their messages and contact them.’