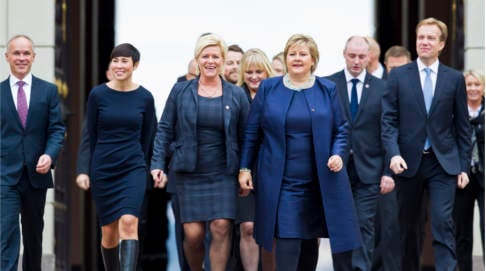 Norway's new government leave the palace, led by Siv Jensen (centre left) and Prime Minister Erna Solberg (centre right) - Vegard Grøtt / NTB Scanpix
"None of the people who have marked themselves out as spokespeople for restrictive immigration have found a place in the government," Frank Aarebrot, Professor of Politics at Bergen University told The Local.
"They're all from the liberal wing of the party, the people who hate to talk about immigration. It's the faction [Progress Party deputy leader] Per Sandberg calls the 'billiard balls' faction of the party, because they all have short haircuts."
The party, which is entering government for the first time in its 40 year history, took seven ministerial positions, while the Conservative Party, which is leading the coalition, took eleven.
"This is a historic day for the Progress Party," Progress Party leader Siv Jensen said after the new government emerged from a meeting with Norway's King Harald V."Now comes the hard work of implementing the political platform we negotiated at Sundvolden."
Jensen will serve as finance minister, the number two post in the government, and Progress will also control the heavyweight labour, family, and justice ministries, which all wield influence over immigration. The directorate of immigration is presently under the control of the justice ministry.
Per Sandberg, the deputy leader of the party and the head of its anti-immigrant wing, was originally tipped for the ministry of transport, but has been left out of government.
Instead the transport post was taken by Ketil Solvik-Olsen, the party's other deputy leader, and the leading figure in its liberal wing.
Sandberg yesterday claimed that he had been offered two different ministerial posts and turned them down.
"After the combined load of the last eight years, I have concluded that it would now be best for me to be a regular member of parliament," he told Adressa newspaper. "I need some peace and quiet."
Aarebrot warned that not leaving out divisive figures such as Sandberg, who are crucial for maintaining the party's grass-roots support, could cause problems later on.
"People like Per Sandberg have a feeling that they are the vote-getters, and none of the vote-getters have won a seat in the government. That is a potential problem."
Below is the new government:
Conservatives:
Prime Minister: Erna Solberg
Foreign Minister: Børge Brende
Culture and Church Affairs: Thorhild Widvey
Education Minister: Torbjørn Røe Isaksen
Health Minister: Bent Høie
Local Government Minister: Jan Tore Sanner
Fisheries: Elisabeth Aspaker
Defense: Ine Eriksen Søreide
Minister to the Prime Minister: Vidar Helgesen
Environment: Tine Sundtoft
Industry Minister: Monica Mæland
Progress:
Finance Minister: Siv Jensen (FRP)
Justice Minister: Anders Anundsen (FRP)
Labour Minister: Robert Eriksson (FRP)
Oil and Energy: Tord Lien (FRP)
Children and Family Minister: Solveig Horne (FRP)
Transport Minister: Ketil Solvik Olsen (FRP)
Agriculture Minister: Sylvi Listhaug (FRP)