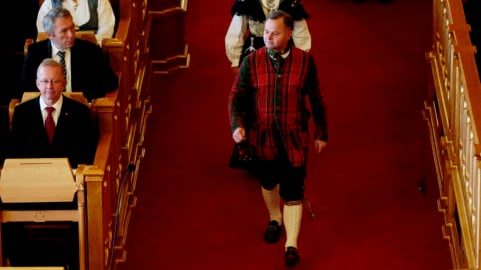 Olemic Thommessen turns heads in parliament on Wednesday - Håkon Mosvold Larsen / Scanpix NTB
Olemic Thommessen, a politician from the Conservatives Party, defended the decision to wear a tartan jacket, breeches and knee socks, arguing the costume had been traditional in his home region of Gudbrandsdal back in the 1700s.
"It looks like a tablecloth," wrote Sonia Huanca Vold, editor of Minmote, Norway's largest fashion website. "I can understand why it is 300 years since this was the fashion."
Thommessen said that he had worn the folk costume, or Bunad as such attire is known in Norway, to emphasise the country's different cultures and traditions.
"Parliament is the people's arena. We come from different parts of the country and represent different local cultures," he said.  "The king wears the finest clothes he has, and it is reasonable that the parliamentary president should do the same."
The suit is a reconstruction of a folk costume common in the northern Gudbrandsdal valley in the 1700s. The Gulbrandsdal tartan out of which the jacket was made is one of more than twenty Norwegian tartans registered in The Scottish Register of Tartans.
Snorre Valen, an MP for the Socialist Left party also caused controversy at the opening, when he refused to stand and sing God Save The King.
“I'm standing up for my position as a republican," Valen told NRK. "It’s not out of lack of respect for the head of state, but on the contrary, out of respect for the diverse standpoints we have in parliament, which is certainly the place we should demonstrate these.” 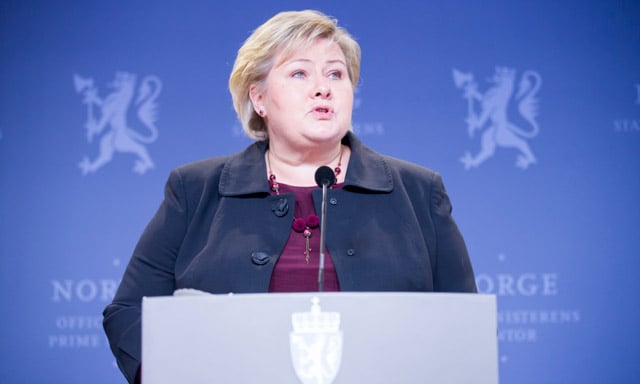 ELECTION
Norway government at risk as budget talks break down 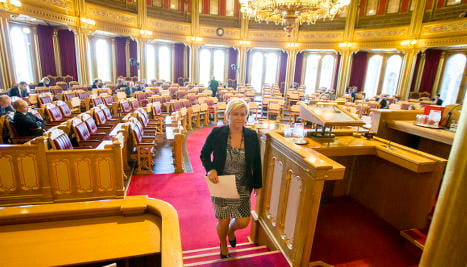