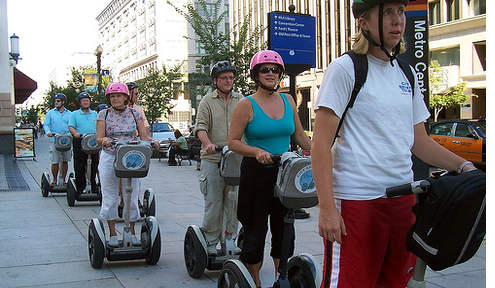 Segway tourists in Washington DC -
Erna Solberg, the leader of Norway's Conservative Party and Siv Jensen, leader of the Progress Party, took a break from government negotiations in the Sundvolden Hotel to film a slot for Late Night with Thomas and Harald, which will be aired on Friday night.
Asked by their hosts what they had agreed that day, Solberg replied: "It was the Segway. We will approve the Segway!"
With its top speed of 20 km/h, the Segway is classified as a moped in Norway, which means users must have a driving license, helmet, vehicle registration and insurance, and wear a helmet.
However, it also has to be EU-approved, which Norwegian authorities argue has never happened, meaning it is in practice banned on both public and private roads.
The news came shortly after the two announced that they would also legalize professional boxing, which along with liquorice pipes and corner fridges, was included in the list of 30 prohibitions Progress announced it would do away with if it got into government.
The world's number one female boxer, unbeaten Norwegian fighter Cecilia Brækhus, told Norway's NRK that she was "thrilled" by the move.
Use of the Segway, which has been banned in Norway ever since it was released in 2003, was liberalised in Sweden in 2008 when the balancer was reclassified as a type of bicycle.
In the UK, the Segway can only be used on private property as it is deemed not to meet required road safety standards.  It is also illegal to use the Segway on public roads in some states.
The Segway was invented by Dean Kamen, the American entrepreneur. Jimi Heselden, the British millionaire who bought the company in 2010, died  tragically afterwards when he drove one of the vehicles off a cliff and into a river near his home in Yorkshire.