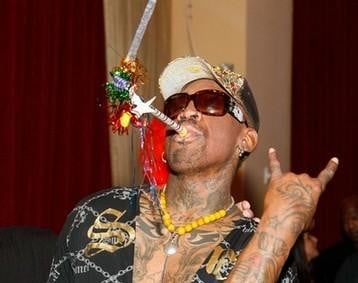 Dennis Rodman in his wild days
Asked out of ignorance for the names of some of the 259 nominations for this year's Nobel Peace Prize, Bjørn Vangen, librarian at the Oslo's Nobel Centre, laughs benignly.  "The list of nominations is kept secret for 50 years, so we can tell you who was nominated in 1963, but I don't suppose it would be much use to you."
The world is not completely in the dark, however, about who's in the running to pick up the prize when it is announced at 11pm sharp next Friday. Some of those nominating make their choices public. Then every year there are the much-cited speculations of Kristian Berg Harpviken, the head of Peace Research Institute Prio.
But perhaps most importantly, a handful of bookmakers run bets on the likely winners.  So here, building on the painstaking actuarial analysis and street smarts of the people at Paddy Power, Unibet, and 888 Sport, are the The Local's Top-10 tips for the Nobel Peace Prize.