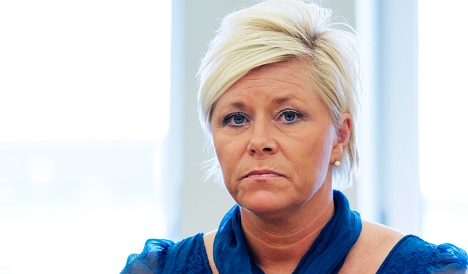 Siv Jensen - Hakan Mosvold Larsen
Solberg, the Conservative leader who is working to put together a coalition after victory at legislative elections last month, failed to convince the Christian Democrats or liberals to enter government with her.
However the two centre-right parties agreed to cooperate with the Conservatives in parliament where their support will be indispensable.
Solberg spoke of a "new cooperation," at a press conference on Monday.
Before the elections, centre-right leaders insisted that the policy gaps between them and the anti-immigration populist Progress Party were too great to consider an alliance with them.
However on Monday Progress, which also espouses huge tax cuts, signed a cooperation agreement which announced the main planks of the future government on issues such as budget orthodoxy, asylum policy and oil prospecting.
The document foresees, in the name of cracking down on forced marriages, raising the minimum age of 24 for immigrants to Norway to set up a family with someone living abroad as well as quicker processing of immigration cases and the creation of closed asylum centres.
The more liberal centre-right parties secured a policy of a partial amnesty for asylum seekers in some cases.
On budget policy the allied parties agreed to strictly limit using the country's massive sovereign funds.
If all goes to plan it will be the first time since its creation 40 years ago that Progress participates in running the country.
It comes two years after Norwegian right-wing extremist Anders Behring Breivik, a dormer Progress party member, killed 77 people, including 69 during a rampage at a Labour Youth camp on the island of Utøya.
The new government is expected to take power on October 14, the date when outgoing Labour Prime Minister Jens Stoltenberg formally stands sown.
In a country where minority governments are the norm, the conservatives and populists won 77 of the 169 parliamentary seats, but can also count on support from the 19 MPs from allied centre right parties.