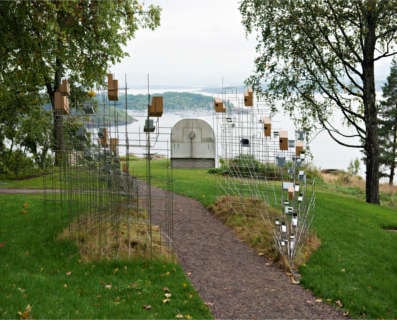 Still Life with Landscape by US artist Sarah Sze: Ekebergparken website
The park crams more than thirty sculptures into its 65 hectares, including work by such modern greats as James Turrell, Louise Bourgeois, Jenny Holzer and Dan Graham. And for lovers of the classics, it features work by early 20th century masters Auguste Rodin,  Aristide Maillol, and Pierre-Auguste Renoir.
The park has been revitalised by Norwegian real estate mogul Christian Ringnes at his own expense, an act of philanthropy that has generated no small amount of criticism, with many locals worrying that it will ruin one of the city centre's last unspoiled areas of nature.
Here's a virtual tour of the park displaying some of the best of the contemporary pieces.