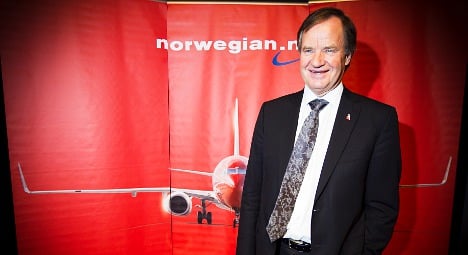 Bjørn Kjos - Heike Junge - Scanpix
"I apologize to the utmost," he told VG in an interview. "It's terrible that they have experienced it. I also hope that they will fly with Norwegian next time too."
Boeing flew Ray Conner, the chief executive of its commercial airplanes unit, to Oslo on Wednesday for emergency talks, after the Norwegian company's two new Dreamliners suffered a string of damaging delays due to technical problems.
"It was a positive discussion," Kjos said. "They agreed to put up spare part stocks at designations we fly to and they'll send a dedicated team of experts to Norwegian so if there's a problem popping up, they can immediately solve it."
He said that Boeing had received "a lesson" as a result of the crisis.
"I think that Boeing has underestimated the work involved in keeping the aircraft in operation and ensuring that errors are corrected in the shortest possible time," he said.
The American company had promised, he said, that it would have Norwegian's two planes in a condition to fly safely from Thursday, although Kjos said he would wait and see if they could achieve this.
"I hope that Boeing's right. It actually already flown a lot of parts around to avoid all these stupid delays. There wouldn't have been any delays if we had had spare parts available."