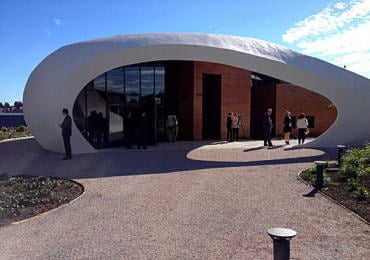 Queen Sonja arrives at Maggie's Aberdeen - Sven Gjeruldsen, Norwegian Royal Court
Queen Sonja opened Maggie's Aberdeen by cutting a traditional Norwegian almond kransekake along with with Camilla, the Duchess of Cornwall, who is the president of the charity Maggie's Cancer Caring Centres
The £3 million shell-like structure, was designed by Oslo's Snøhetta architects, the group who designed the new Opera House that now dominates Oslo's seafront.
Maggie's Cancer Care Centres was founded by Charles Jencks, the celebrated architectural writer, after his wife Maggie Keswick Jencks died of cancer in 1995.
Jencks, a strong believer in the power of architecture to lift people, commissioned leading architects, such as Frank Gehry, Richard Rogers and Zaha Hadid, to build extraordinary buildings where those suffering cancer can go for support.
"These places are the most uplifting places you could ever be, and you come out feeling better," the Duchess said at the opening. "That is surely the point of Maggie's. You see so many smiling faces and that is what you want if you're facing this terrible disease."
Kjetil Trædal Thorsen, Snøhetta's co-founder, said working with Maggie's was "a great honour".
"For Snøhetta, the relationship between form and content is central to the development of our architecture, and we are proud to have been working together with Maggie's, rising to the challenge demanded by this building that is small in size but immeasurably larger in content."
Snøhetta said the building was designed inside a "soft exterior form", which "envelops the whole of the centre and defines the courtyard garden".
It said the grass field and garden surrounding the building were intended to form "a large-scale pattern within which the pavilion building forms an integral part."
Camilla and Britain's Prince Charles came to Norway in March as part of a tour of Scandinavian countries.
Below, Scottish golfer Colin Montgomerie, who led fund-raising for the centre, gives a tour of the completed building.