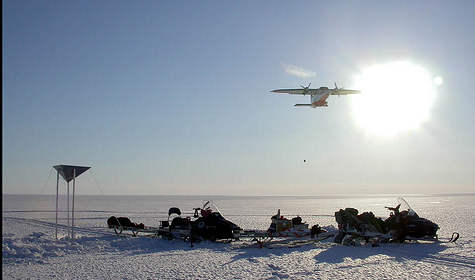 A supply plane lands on the new Harald V Land - NASA Goddard Photo and Video
"Harald V Land" covers a 6,500 km2 area of Nordaustlandet, and takes in most of Austfonna, the second largest ice-cap in Europe.
The naming committee of the Norwegian Polar Institute decided to grant King Harald the honour on September 15, after a trip the king had made to the archipelago in August.
"A large area of Nordaustlandet lacked a so-called area name," explained Jan-Gunnar Winther, Director of the Norwegian Polar Institute, to state broadcaster NRK.
"There is a lot of wildlife there, including polar bears and seals, and it is used extensively for climate research,"
Harald V is the third Norwegian monarch to have part of the archipelago named after him.
Both his father Olav V, and his grandfather Haakon VII had parts of Spitsbergen, the archipelago's main island, named after them.