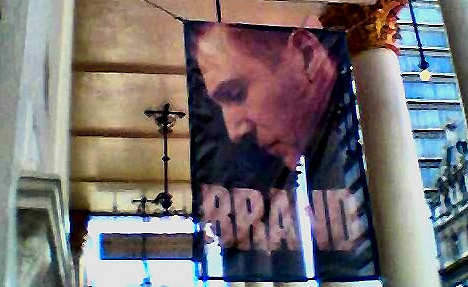 Ralph Fiennes as Brand at the Haymarket Theatre in London - Katja Maria
Fiennes was at the festival to promote The Invisible Woman, in which he stars alongside the British actress Felicity Jones.
"I love Ibsen," he said, pointing out that he had played the lead character in Brand, Ibsen's verse drama about an uncompromisingly idealistic priest, in London and Stratford.
"I've done Brand on stage, and I love The Master Builder," he said. Indeed Felicity and I talked about the possibility of making Builder together."
The Invisible Woman tells the story of the intense affair Charles Dickens, the British author, had with the much younger actress Nelly Ternan. 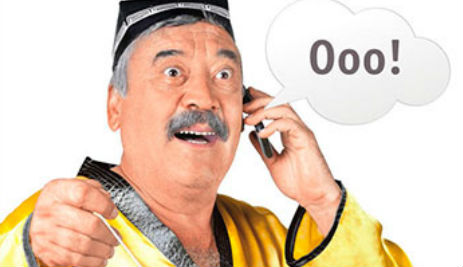 An advert for Beeline, Vimpelcom's brand in Uzbekistan. Photo: Beeline
“We have been worried for some time about the investigation into Vimpelcom,” the company’s chief executive Sigve Brekke said. “Those concerns are now considerably more serious after we see that the company has chosen to make a provision.”
Vimpelcom on Tuesday said it had made $900m of provisions for potential fines which may arise from a US-Dutch probe into its activities in Uzbekistan.
US and Dutch authorities suspect Vimpelcom, whose shares are listed on Wall Street, may have made illicit payments to a company close to Gulnara Karimova, daughter of Uzbek President Islam Karimov, in order to obtain operating licences.
“Based on its ongoing assessment of the investigation during the third quarter of 2015, the Company will make a provision in the amount of $900m in its third quarter financial statements,” the Amsterdam-based and New York-quoted Vimpelcom said in a statement.
Vimpelcom, based in Amsterdam and headed by French former SFR boss Jean-Yves Charlier, has more than 220m customers in ten countries, mainly former Soviet Republics and emerging nations.
The investigation has already brought the resignation last week of the chairman of Norwegian telecoms operator Telenor. Svein Aaser stepped down on Friday after the Norwegian government withdrew its support for him amid the alleged corruption scandal.
The largest telephone operator in the Nordic region, Telenor has a 33 percent stake in VimpelCom.
Telenor’s former chief executive Jon Fredrik Baksaas admitted in an interview published in Norway’s Dagens Næringsliv newspaper on Wednesday that he had witheld information on Vimpelcom from a parliamentary hearing in January.
“In retrospect, I see that we should have gone out with the information earlier,” he said. “When we went to the hearing, the  investigation had not progressed far enough for us to realise what this information could mean. We didn’t see that this was something we could share, as investigation authorities in several countries deemed it confidential material.”
Url copied to clipboard!