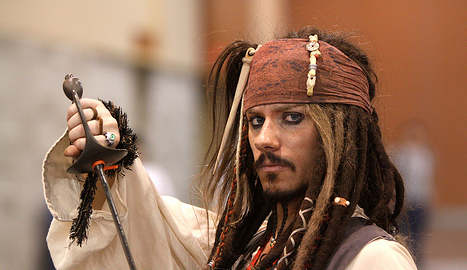 Johnny Depp look-a-like - Gage Skidmore
Disney, the studio producing "Pirates of the Caribbean: Dead Men Tell No Tales" has delayed the film's projected launch by a year to July 2016.
Joachim Rønning and Espen Sandberg were given the Pirates of the Caribbean job in May, shortly after being nominated for an Oscar for last year's hit film Kon-Tiki.
"We have an outline everyone loves but the script is not done,” Jerry Bruckheimer, the film's producer told The Hollywood Reporter. "We want a script that everyone’s signed off on and a budget that everyone’s signed off on."
He said that the box-office failure of Disney's The Lone Ranger had made the studio more cautious of high-budget productions.
"Everybody’s more cautious,” he said.