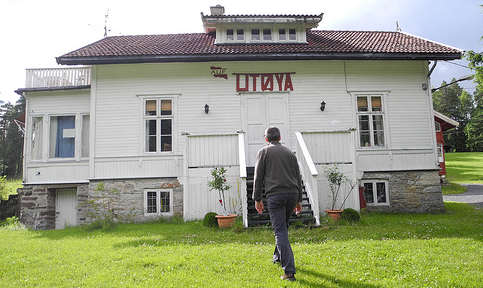 Outgoing Prime Minister Jens Stoltenberg on a visit to Utøya -- Norwegian Prime Minister's Office
They were among 33 Labour Party candidates in Monday's parliamentary election who had escaped Breivik's bullets on July 22, 2011, according to Anne Odden, spokeswoman for the party's parliamentary group.
The three are Åsmund Aukrust, Stine Håheim and Fredric Bjørdal. A fourth, Eigil Knutsen from Hordaland, looked likely to be elected on Tuesday,  but lost his place when the final votes were counted.
The Labour Party lost nine seats in parliament to end up with 55, and is set to be ousted from government after eight years in power.
Breivik deliberately targeted Labour in his rampage, accusing the party of allowing Norway to become a multicultural society.
After setting off a bomb in Oslo's government district, killing eight people, Breivik travelled to a Labour Youth summer camp on the island of Utøya near the Norwegian capital.
There he opened fire indiscriminately, killing 69 people, mostly adolescents, before being stopped by police.
Breivik was sentenced last year to the maximum penalty of 21 years in prison, a term that can be extended indefinitely if he is still considered a threat to society.