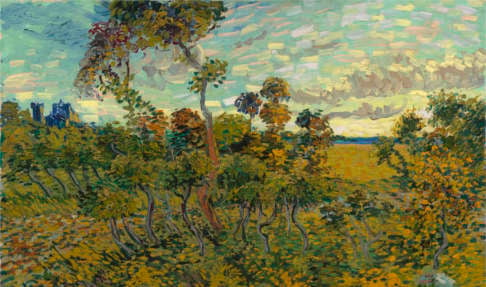 Sunset at Monmajour - Van Gogh Museum
The painting is expected to fetch tens of millions of dollars.
Norwegian industrialist Christian Nicolai Mustad bought 'Sunset at Montmajour' in 1908 but, according to a family story, he banished it to his attic in fury after a French diplomat told him it was a fake.
Since he died in 1970, Mustad's descendants have seen the painting twice rejected as a Van Gogh, including once in 1991 by the Van Gogh Museum.
But on Monday, Louis van Tilborgh and Teio Meedendorp, two researchers at the museum, declared that it was genuine.
"We carried out art historical research into the style, the depiction, use of materials and context, and everything we found indicated that this is a work by Van Gogh," the two said in their report.
The experts dated the painting to the summer of 1888, when the Dutch artist was painting near Arles, saying the pigments, canvas and the scenery all matched other works painted at that time.
"Moreover, there are two letters from the artist from the summer of 1888 that literally refer to the painting," the two reported. "Van Gogh writes that he had not succeeded, which can be explained, because the painting shows very strong and typical characteristics of Van Gogh, next to weaker and less convincing elements."
Sunset at Montmajour will be exhibited to the public in an exhibition at the museum from 24 September.
The Mustad family made their fortune when their factory became the world's largest producer fishing hooks, a market in which the company remains a significant producer.