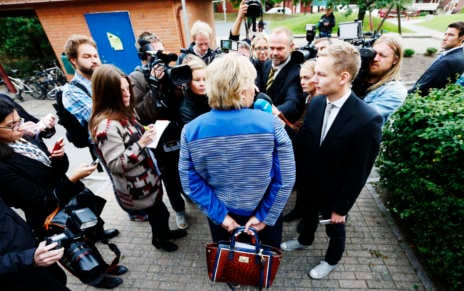 Erna Solberg leaves home to greet the press - Lise Åserud / NTB Scanpix
"I had a lie in and washed some clothes," she told a bemused waiting press pack. "It must be done".
After a rousing speech celebrating her victory last night, Solberg announced that she would sleep in late before starting gruelling coalition talks with the other three right-wing parties.
By the time she returned home, neighbours had posted a congratulatory note on her door.
"Congratulations for becoming Prime Minister Erna," it read. "We're sad that you're leaving, but glad that you won".
When her husband Sindre Finne came out to meet the press at 8 am on Tuesday morning, the Prime Minister to be stayed inside, not emerging until after 10am.
"I hate moving," she joked with the press. "There are so many strange things that come out of the cupboard."
Asked how it felt to be Norway's next prime minister, she said she felt "responsible".
"It's very pleasant, but now we must start thinking about our next steps," she said.