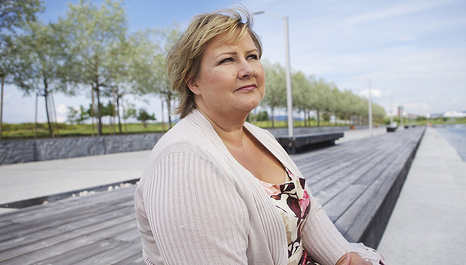 Erna Solberg - Conservative Party
The Conservative Party has scheduled a press conference for mid-day on Tuesday, after which, barring unexpected electoral disaster, the cakes will be served.
"I am quite sure that there will be a right-wing majority and a right-wing government," the 52-year-old — known as 'Iron Erna' for her tough stance on asylum as a minister from 2001-2005 — told Aftenposten.
However she said that she was did not expect any party to win more than 30 percent of the vote.
"I do not think we will get in the 30's. I don't think any of the parties will," she told Dagbladet newspaper.
In a poll carried out by Infact for VG on Friday, Labour had overtaken the Conservatives, with 28.6 percent of voter support, to the Conservatives' 27.5 percent.
But according to TV2, the red-green coalition Labour heads was expected to win 73 mandates, compared to 95 for the four right-wing parties take together.
Solberg called on Prime Minister Jens Stoltenberg to announce his resignation as soon as it was clear that the right-wing parties had a clear majority, rather that stay on in the hope that the Conservatives fail to reach agreement with their coalition partners.
"With Labour one can never take anything for granted," she said. "I expect that they will attempt some ruse to cling on to power."
Labour may still be in with a chance if the Liberals and the Christian Democrats fail to reach an agreement that will allow them to govern alongside the populist Progress Party.
TV2 predicts that the Progress Party and the Conservative Party together will have around 74 mandates, compared to 73 for Labour, while the Conservatives, the Liberals and the Christian Democrats together would have just 65 mandates.
"In nine out of the ten years Gro Harlem Brundtland was Prime Minister, there was a bourgeois parliamentary majority. But it was not viable," Labour's Trade and Industry Minister Trond Giske pointed out to Stavanger Aftenblad.
Meanwhile Stoltenberg refused to be drawn on whether he will stand down as leader of the Labour Party if he is defeated, or seek to remain in politics and seek another term as Prime Minister after the next election.
"I'll answer to a future election committee and nomination committee when the time comes," he said.