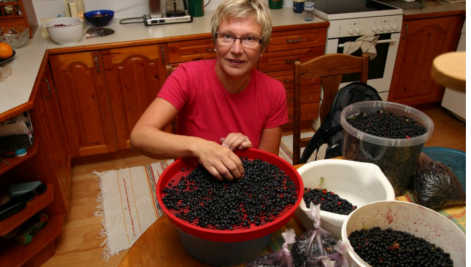 Anita Ittelin Hellesø with her record berry bounty - Torbjørn Ittelin
"It's a record, I have never in my life picked so many,"  Anita Ittelin Hellesø told Finnmarken on Tuesday, boasting that she had picked more than 100 litres of blueberries this year, while she normally picks only about five.
With 40 litres of cloudberries also already in her larder, she said she worries that when she next goes out picking, she might run out of storage space.
Meanwhile Kirsten Johnsen told Finnmarks Dagblad on Monday that she could not remember this many cranberries for more than 50 years.
"You need to go back to 1960 to find a year with as much as cloudberries, and when it comes to lingonberries, we have never experienced anything like this before," she said.