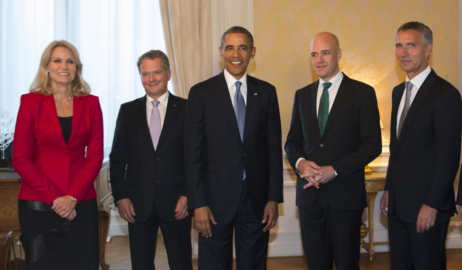 Four nordic leaders with President Barack Obama before dinner - Berit Roald / Scanpix NTB
"It was friendly, useful, pleasant and amicable. It is always inspiring to meet Obama." he told reporters.
The prime minister said that Obama had been receptive to a proposal spear-headed by Norway for a joint UN condemnation of Syria's use of chemical weapons, but was nevertheless impatient to mount a military strike, with or without a UN mandate.
"Obama said he was aware of how central the United Nations is in our foreign policy and how important the UN is for us in security policy issues," Stoltenberg said. "At the same time he argues that when the UN does not demonstrate its power to act, it is imperative that America takes action without a mandate. But he agrees that it is best to go through a UN mandate."
Stoltenberg and Obama dined alongside Swedish prime minister Fredrik Reinfeldt, Denmark's prime minister Helle Thorning-Schmidt, Sauli Niinistö, the president of Finland, and Iceland's prime minister Sigmundur David Gunnlaugsson.
The menu included trout, deer and passion fruit mousse.
Before the event, Stoltenberg said he believed that the joint condemnation initiative, put together by the foreign ministers of the Nordic and Baltic countries, could help prepare the way for a UN mandate.
"Although the Security Council has proved unable to agree a common stance on the Syrian conflict, we should at least try to see if it is possible to agree a common policy on the use of chemical weapons," he said.