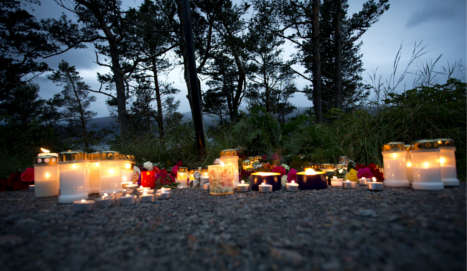 Candles laid near the site where Anja Weløy Aarseth's body was found - Svein Ove Ekornesvåg / NTB Scanpix
The man, who is in his early 20s and has a young child, has admitted to killing the 21-year-old, his lawyer said on Thursday morning.
"He has admitted to the police and me that he has caused this woman's death. Furthermore, he has also stated that he would consent to any remand," Reidar Andresen told NRK. "This is a tragic case for all involved, and my job is now to protect the client."
The man was seized on Wednesday evening after police matched his DNA with samples taken from the body.
As well as 'liking' the memorial page RIP Anja Weløy Aarseth, which has 50,000 followers, the also shared an article on Friday night entitled "Classmates worried about Anja Weløy Aarseth (21)".
Last year, the murderer was sentenced to 90 days in prison for making death threats against his girlfriend and police, threatening a woman with a knife, possession of illegal firearms, and drug use.
Aarseth went missing on 28 August after she went for a jog in the hills behind Ålesund, the town where she lived.
Her body was found on Saturday, after a hunt involving hundreds of volunteers.