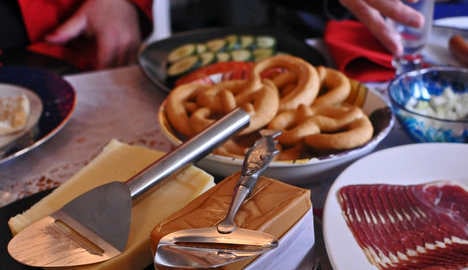 Brunost: a sign of gastronomic poverty? - Flickr
You'd think that Norwegians knew more than enough about what their argumentative, drink-sozzled southern Scandinavian neighbours thought of them.
But it seems not.
When Steffen Hedebrandt argued that his trouble tracking down tasty international cheese was symptomatic of a country where the government dictates to citizens what was good for them, it caused a stir across the Norwegian media, with the Progress Party seizing on it as evidence to support its plan to slash away the country's many prohibitions.
"Since the article was posted, I've received so many thank you letters by email and text messages," Hedebrandt says. "I think it’s because there’s not so many people who dare to speak about things like this in Norway. They're a little shy about starting conflicts. They prefer not to pick a fight, whereas Danish people are more blunt."
What has puzzled him most since he moved to Norway is how little Norwegians ask for.
"My point I make is that you're the richest country in the world, but who cares if you can’t even buy proper cheese in the supermarket and clubs and bars have to close at 3 o'clock in the morning.  Why are you not focusing more on ecological food? Why are you not developing sustainable energy. Why are you not making it possible for bicycles to get around the city?".
In Hedebrandt's opinion, the paltry selection in Oslo supermarkets reflects a government that puts the well-being of Norwegian farmers and industry above that of its consumers.
"If you see the amount of instant food powders that they have in the supermarkets, there’s a lane just with powder products: here’s your lasagne, here’s your soup. That’s a sign of gastronomical and cultural poverty."
But it's the scarcity of decent imported cheese is what bothers him the most.
"That’s an example of a government that puts politics higher than the gastronomical development of the country. They would rather have cheese that’s produced by Norwegian farmers, even though it’s a poor product compared to the amazing cheese that you can get from all over world."
The government in Norway believes strongly that it knows best, he argues.
"The point I’m trying to make is that in Denmark you’re really set free and the government is not micro-controlling things, whereas in Norway the government tries to control everything."
"I can definitely see that we go on strike a lot more. Our youth are much more outward-going, more creative I would say."
It seems many in Oslo agree.
"Many people wrote to me agreeing that they aren’t really rebellious enough, and they’re just let the government run their lives."
He ends with a call for Norway's government to experiment with loosening up some of its regulations.
"Why don’t they just let the pub closing law go for month and see what happens? I don’t know if people actually will go crazy or not. I don’t think so."