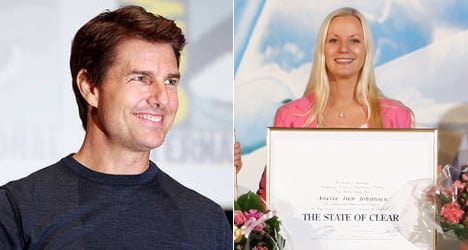 Tom Cruise (L): Flickr and Anette Irene Johansen (R): Anette Irene Johansen
Anette Irene Johansen, from Fredrikstad, south of Oslo, was invited to the mysterious audition at the organisation's Copenhagen branch in 2005, when she had been in the church for three years, several working with tsunami victims in Sri Lanka.
"They asked me so many questions about my life, my family background, everything I'd ever done in Scientology," she told Australia's Women's Day magazine.
"There was a lot of talk about Tom Cruise at that time – he had just been in Norway hosting the Nobel Peace Prize concert."
Before she left, she had to sign a waiver, promising not to mention anything about the audition.
Two weeks later, she got a call from a man in California who said he was from the 'international management' of Golden Era Productions, a media company run by the church.
"He said it was about my audition and that he needed to ask some very private questions," she said. "He asked, 'Do you have any sexual perversions?'"
The auditions were first revealed in Marc Headley's 2009 book, Blown for Good, but Johansen is the first interviewee to go public.
According To Vanity Fair magazine, Nazanin Boniadi, who dated Cruise until January 2005, was auditioned in October 2004.
Johansen says she is happy she was not accepted.
"I think what happened to Katie is terrible. Even now it must be very difficult for her because she still has a child with him. Tom is totally cult-minded. I'm very happy that I was not matched up with him."
The Church of Scientology denies such auditions ever took place.
"We stand by our original statement from last year: There was no project, secret or otherwise, ever conducted by the Church to find a bride (via audition or otherwise) for any member of the Church," a spokesperson said.