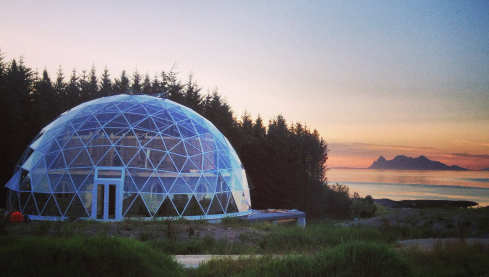 Naturhuset - Benjamin Hjertefølger
"We live in the northern part of Norway where it's very windy and cold, so we wanted protection around the house where we could build fruit and vegetables," Benjamin Hjertefølger told The Local.  "We also wanted to build a house that's good for living, with only natural materials and no poisonous, pre-made things."
The house, called Naturhuset, or The Nature House, is a Hobbit-style cob house surrounded by 180 square metres of glass-covered gardens and terraces, where the couple plan to grow fruit such as oranges, tomatoes, squashes and green peppers.
On top of the house, the couple have built an under-glass terrace, where they can enjoy the midnight sun and stars, and do their yoga.
The house is on Sandhornøy, the island south of Bøde, northern Norway, where the couple grew up. It has taken a year and a half to build and cost some three million Norwegian kroner ($490,500).
The couple want to operate the dome as a biosphere, making them more conscious of what they consume and throw away.
"Everything we eat and consume will go into this cycle. If we use detergents with toxins, they will accumulate and become a burden on the plants in the greenhouse, just as they do in the wild," Ingrid told VG newspaper.
The couple expect to move into their new house some time in the winter.
"It will be very good to move in," Hjertefølger said. "It's starting to look very nice now we've plastered the walls."
Here is a video the couple made of the house's construction: