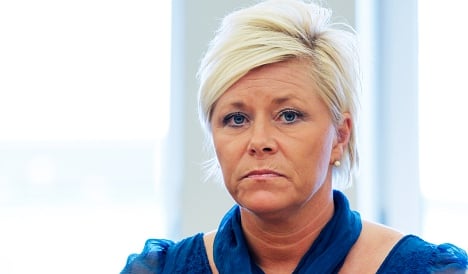 Progress Party leader Siv Jensen - Hakan Mosvold Larsen/ Scanpix
"The fact that the conservative parties are not ready to stick together has cost us the last two elections," Progress MP Hans Frode Asmyhr told the Dagsavisen newspaper. "I look at this as simply a helping hand to the coalition."
The leaders of the Liberal and Christian Democrat parties, Trine Skei Grande and Knut Arild Hareide, declared on Monday that they would not be part of a coalition which includes the anti-immigrant Progress Party, putting the party's hopes of entering government for the first time suddenly in doubt.
As a result, Conservative leader Erna Solberg could face the choice after the election on September 9 of either forming a very right-wing government in coalition with the Progress Party, or a centre-right, and probably minority government, with the two smaller parties.
The announcement has clearly unnerved the Progress Party, with some of its most senior politicians on Tuesday coming out to condemn the move.
"This is the arrogance of power," said Christian Tybring-Gjedde, who leads the Progress Party in Oslo. "We should treat each other with respect rather than sit on a high horse and say, 'look at me, I have five percent support, and I decide'".
Progress Party crime spokesman Jan Arild Ellingsen said he now doubted whether the two rebel parties genuinely wanted power.
"You don't rule out the Progress Party if you want a change," he  said. "What will they do? Seek out the support of the Green Party?"