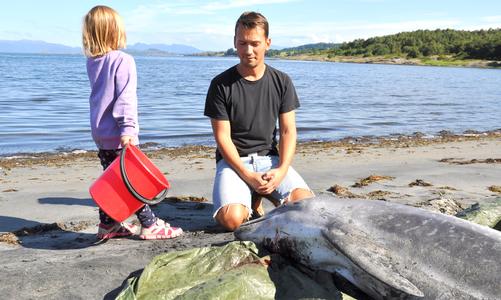 Dead dolphin - Kristoffer Kirkhus
A dead dolphin was found washed up on Borestranden in Klepp on Thursday morning, only hours after another was found on the seafront at Vignes.
The deaths come as an unusual number of dolphin bodies are being washed up  along the US East Coast, with more than 120 bottle-nosed dolphins found dead since June, a number not seen since 1987, when the dolphin population was hit by an epidemic of morbillivirus, an illness similar to human measles.
"If it's many dolphins, it's an unusual event," Arne Bjørge, at Norway's Institute for Marine Research told The Local. "There have been in the past some diseases that have killed dolphins, for example the striped dolphins in the Mediterranean had a mass-mortality some years ago, and that can happen also in the Atlantic."
Kristoffer Kirkhus, who found the Vignes dolphin, told The Local that it measured some two metres long and was "in pretty fine condition". It had probably only been on the shore for a few hours, he said.
"It just had damage on one side where some birds had fished out its eyeballs, which is the first thing they go for when they find a dead animal."
"It's absolutely alarming," Susan Barco, a research coordinator at the Virginia Aquarium and Marine Science Center Foundation, told Reuters last week about the number of dolphins being washed up in the US.
"This is really frightening because these animals are sentinels of ocean health. Strandings have been much more common in the past few decades and we think it's an indication of the health of our ecosystem."