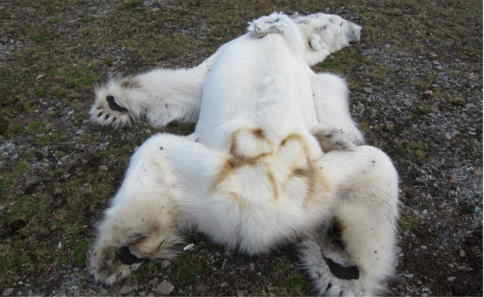 Starved Bear - Dr Ian Stirling
"It had moved a long way north which the Norwegian Polar Institute said was very unusual," said Ashley Cooper, who found the bear on July 7. "It just kept going north to find sea ice to hunt seals on."
Cooper, who runs the agency Global Warming Images, said that the eco-tourism expedition he was with,  accompanied by renowned polar bear expert Dr Ian Stirling, had travelled deep into the Arctic before it found ice.
"We had to push up until 550 miles from the North Pole before we found any sea ice, which was kind of rotten. It was very patchy and broken up and thin, only just about holding the weight of a polar bear."
The bear, a 16-year-old male, was found on on a small island near Texas Bar. When it was tagged in April in southern Svalbard, some 250 kilometres from where it was found, it had been in a healthy condition.
Dr Ian Stirling, who works as an adjunct professor at the University of Alberta, told The Local that this spring's record low levels of sea ice were the most likely reason for the bear's death.
"The bear was extremely thin, no apparent fat at all, and based on all these pieces of information, I thought the most likely cause of death was starvation."
Stirling stressed however that as he was not able to handle the carcass or take samples, this could not be known with certainty.  He confirmed that Svalbard had seen unusually low levels of sea ice last winter, making it difficult for polar bears to find food.
"I had been following the ice on the satellite images all winter, so I was well aware that many of the fiords and inter-island channels did not freeze normally, if at all last winter, probably because of climate warming."
According to the International Union for the Conservation of Nature, eight of the 12 polar bear groups for which data is available have declining populations. It predicts that the number of polar bears will decrease by between one-third and a half over the next 45 years.
Svalbard's polar bears draw in thousands of tourists every year, and those on expeditions must be equipped with guns and polar bear wires to protect themselves from the animals.
In 2011, Horatio Chapple, a 17-year-old British schoolboy, was mauled to death when a bear entered his expedition's campsite.