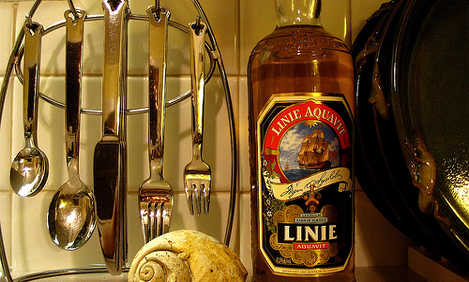 Linie Aqvavit - Bruce Turner
The plans come after a pre-budget report by the Ministry of Finance showed that there was still scope for higher alcohol taxes to actually decrease consumption, rather than just trigger a boom in smuggling.
The report, leaked to TV2, argued that bumping up the tax rate by 5 per cent would cut alcohol consumption by some 469 million Kroner, while only increasing smuggling by some 82 million Kroner.
"Given the assumptions built into the model, it seems that the tax increase on alcohol would reduce Norwegian consumption of alcoholic beverages," it wrote to the Ministry of Health and Care Services.
Norway already has the second highest alcohol taxes in the world after Iceland, with some 415 Kroner in taxes levied per litre of pure alcohol, next to 461 Kroner in Iceland.  A litre of pure alcohol in the UK would be taxed the equivalent of  230 Kroner.

Kjetil Lund, a state secretary in the finance ministry, said it was too early to discuss next year's budget plans.

"The government has not taken a position on the tax arrangements for 2014 yet," he said. "There is often speculation in advance of higher alcohol taxes and we do not comment on such speculation. History shows, however, that most years we have not increased alcohol taxes."