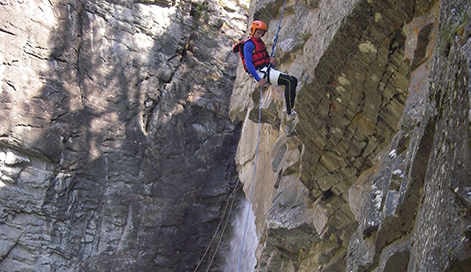 Abseiling in Aura - Lom and Skjåk Adventure
Gates, his wife Melinda, and their three children, spent four hours exploring in the canyon at Aura on a tour run by Lom and Skjåk Adventure.
"They were just like a normal family and they were treated like all other customers," Kari Hånsnar, the company's owner, told The Local. "They had a nice time in there."
The family has been cramming their time in Norway with activity ever since they touched down by private jet on Wednesday afternoon.
Within hours of their arrival, they visited Oslo's Viking Ship and Kon-Tiki museums, before being whisked off to Lillehammer by helicopter for a run down the Olympic bobsleigh track.
On Thursday they enjoyed a boat trip and a sumptuous seafood lunch with Crown Prince Haakon and Crown Princess Mette-Marit.
They then spent Friday canoeing and hiking around Geiranger fjord, before winding down on Saturday with a visit to the Atlantic Ocean sea park in Ålesund.