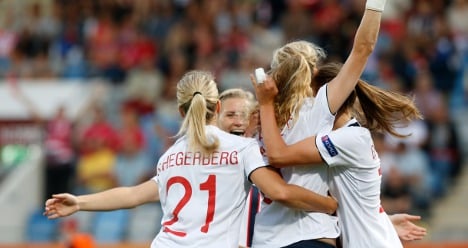 The semi-final in Sweden on Thursday night had fans of opposing sides Norway and Denmark gripping their seats in suspense after a Danish striker annihilated Norway's one-goal lead in the 87th minute of the game.

After Norway scored their first goal already in the third minute, however, Norwegian sports commentators said their players became too "passive", crediting the Danes for their exuberant tries to redress the balance. NTB critiqued rigid defence structures on the Norwegian side, saying they left the field open for repeat Danish attempts at scoring.

The star of the show was goalie Ingrid Hjelmseth who blocked the two first shoot-outs by Denmark's Line Røddik and Theresa Nielsen.

The Norwegian side's quartet of Solveig Gulbrandsen, Cathrine H. Dekkerhus, Maren Mjelde and Trine Rønning put ball to net in their attempts at goal, shoring up a 4-2 win for Norway, who are now set to take on the Germans after their dramatic semi-final against Sweden earlier in the week which had the homeside in tears.

Norway's women have faced off with their German counterparts before, during the 1995 World Championships.