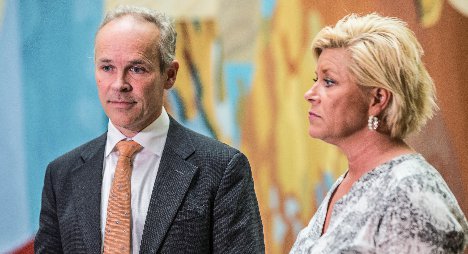 Høyre Deputy Chairman Jan Tore Sanner with FRP Chairwoman Siv Jensen. File: Stian Lysberg Solum/Scanpix
"Norway has been left behind in relation to the EU. It will weaken the Norwegian competitiveness on the US market if the EU gets such a deal," Høyre Deputy Chairman Jan Tore Sanner told the NTB news agency.
He got the backing of cross-party colleague Ketil Solvik Olsen, FRP's finance spokesman. "There is no reason to wait," he said. "It is obvious that an agreement would strengthen Norwegian consumers and business."
Norwegian Trade Minister Trond Giske had little patience for the statement, made a few months before Norwegians head to the polls.
"This shows how little they understand how you reach such a trade agreement," he told NTB. "Free trade negotiations between the US and the EU have barely begun, and will take at least 18 months."
Giske added that the government had to first ascertain whether a free-trade agreement would benefit Norway.
"It may seem like a good deal, but it is not a given. We need to find out if an agreement would be in Norway's interest."