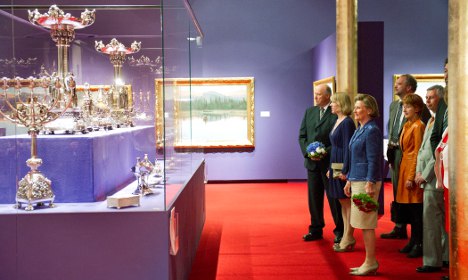 The royal family visit an exhibition at the museum in Bergen. File photo: Scanpix

The gang of six staged their heist to make sure the police was distracted while they raided the museum in January, the prosecution has claimed. Charges of aggravated theft and aggravated vandalism have been brought against the gang.

"We argued that they together planned and performed the robbery, but had different roles," prosecutor Rudolf Christoffersen told the NRK news network. "Some set fire to cars to distract the police, while others entered the museum."

Because the gang was more numerous than three people, prosecutors have decided to charge them as an organized criminal group under Norway's anti-mafia laws. The penal code allows five years to be added to a criminal sentence if the prosecutor can prove organized criminality, which means the strictest sentence that could be handed down for the robbery would be eleven years.

"The suspects who entered the museum have admitted doing so, but no one has confessed to setting the cars alight, nor has anyone confessed to being part of an organized group," Christoffersen added. Two men are being remanded in custody for the theft, while the remaining four have been set free awaiting trial, according to Hordaland police district organized crime unit head Jørn Solsvik.

Norwegian authorities are yet to find the missing items, some 20 pieces in porcelain, paper, jade and bronze, which are valued at at least 2.5 million kroner ($420,000) by the museum Vestlandske kunstindustrimuseum. Several other items on display were also damaged in the break in, when the thieves broke several glass show cabinets. They used a car that had been stolen in Oslo to make their get-away.

The local Bergens Tidende newspaper reported that the police had arrested the six suspects at different times. The court date has not been set, but proceedings will be held in Bergen District Court.