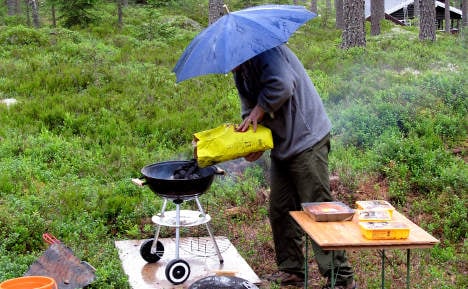 A Norwegian man fights the rain to light his barbecue. File photo: Svein Aage Nilsen/Scanpix
"Summer is peak season for us," said senior Health Directorate adviser Mette Ekeland.
"It's when we have the highest number of calls," she said, adding that the emergency number that Norwegians can call if they fear having been poisioned gets about 40,000 queries a year.
While Norwegians who have jetted off to warmer climates for their summer holidays may fear any and all ailments from Delhi Belly to rabies, it appears that vacationing on home turf has its fair share of health threats too.
The NTB news agency reported this week that would-be poisoning accidents run the gamut from being stung by a jelly fish when taking a dip in the sea, to nature lovers accidentally ingesting poisonous plants.
While the most common native jellyfish species rarely cause severe burns, the Cyanea Capillata, which is yellowish red in colour, can cause discomfort.
Health authorities also warn Norwegians that ticks can transmit pathogenic viruses and bacteria to humans and animals.
Yet among the long list of potential disasters, it is still munching away on unknown berries and mushrooms in the Norwegian forests that put most holiday-makers at risk.
For a list of what to look out for, Norwegians can access more info on the Poison Info and Norwegian Health websites. ​​