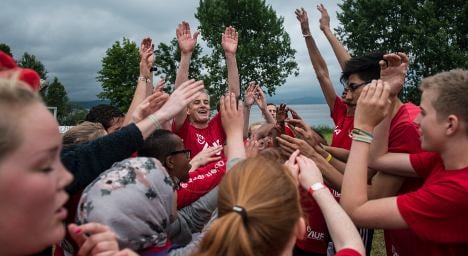 Walking on stage wearing a leisurely check shirt and sunglasses, Stoltenberg was met by rapturous applause by the young party members. He arrived at the camp as musician Renate Tårnes sang and played her guitar. Tårnes also performed at the last summer camp on Utoya island, where homegrown extreme-right terrorist Behring Breivik devastated the peaceful summer camp – an annual staple for the Labour Party's youth wing (AUF).

AUF leader Eskil Pedersen welcomed Stoltenberg onto the stage by calling him "the best prime minister in the world".

"We are stronger than ever," a visibly touched  Stoltenberg said. "Two years ago, the world saw the awful face of terrorism, but they also saw something else. "They saw an AUF that did not abandon its ideals, they saw AUF stick up for their ideals. You should be proud of this today."

"One ideal is the desire for a just society, a just world," Stoltenberg said, before addressing child poverty in the world. The prime minister did also, however, retain a note of humour in his address.
"Eskil told me there has been a lot of flirting, and new romances. That doesn't worry me, I don't mind flirting, but I do wonder why Eskil is in the room with the new couples," Stoltenberg joked.

While the atmosphere was joyous, the memories of the attacks two years ago were on the leadership's mind. "We want to focus on politics, but we keep in mind that many are thinking of and comparing it to Utøya," Pedersen told the Aftenposten newspaper.

Stoltenberg's address set the tone for the rest of the weekend, with several heavy-weight ministers set to meet the young party members. On Saturday, the camp-goers will discuss the labour market after meeting with Enterprise Minister Anniken Huitfeldt and Trade Union Confederation (LO) leader Gerd Kristiansen. Culture Minister Hadia Tajik and Justice Minister Grete Faremo are also on the list of high-profile ministers set to address the almost 1,000 young people at the summer camp near Oslo.