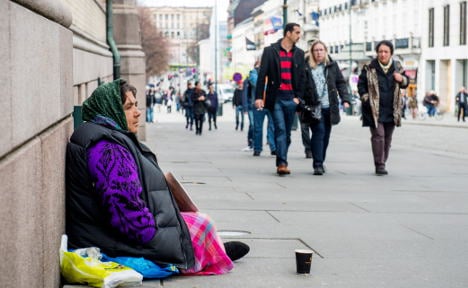 A woman asks for money near the Norwegian parliament. Photo: Fredrik Varfjell/Scanpix

"Neither have we seen any increase in the summer months compared to the milder months."

Woldsund added that many migrants may have chosen to avoid Oslo, instead heading for other Norwegian towns.

The description of an "invasion of beggars", however, worries The Norwegian Church Mission, which has outreach programmes across ten parishes in Norway.

"You have to be very careful of propaganda that is tied to what different groups of people look like," Deputy Secretery General Johannes Heggland told Dagsavisen.

"Earlier this spring there were a lot of messages from different sources – from politicians to different authority figures – who told the media there would be a lot more people asking for money this year than previous years," he explained.

"You got the impression they were going to come in their thousands."