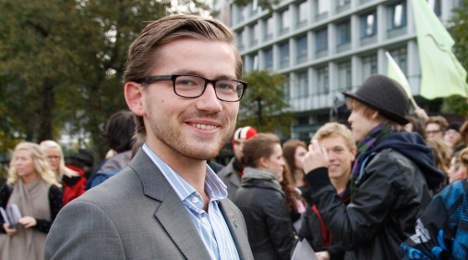 Sveinung Rotevatn. Photo: Private
The Young Liberals of Norway want Norway to grant the right to seek asylum to the man who leaked secrets about extensive surveillance in the United States, as Edward Snowden fears he will be extradited and put on trial.
When Snowden revealed in the Guardian newspaper that it was he who leaked the information about the National Security Agency (NSA), the news created a media storm across the world. He is now in Moscow, holed up at an airport, but fears extradition to the United States. On Tuesday, the whistle-blower organization WikiLeaks announced that Snowden had applied for political asylum in several countries, including Norway.
Snowden has put himself at enormous risk by revealing and warning the world about this type of extensive monitoring. By taking his need for asylum seriously, Norway could send a clear signal that the world community has to guard against the abuse of power and that you can speak out about surveillance without fearing for your own safety.
According to normal procedure, you have to be on Norwegian soil or at the border to seek asylum. However, there are exceptions.
The Immigration Act allows embassies or international organizations to request that applications are processed, even if the applicant is abroad. In 2007, about 15 persons were granted residence in Norway this way.
On Tuesday, the Norwegian Publicist Society (PEN) said that they were considering their right to take this initiative and ask that Norwegian authorities look into the merits of allowing Snowden to apply for asylum.
When US authorities allegedly carry out extensive monitoring of social media such as Facebook and e-mail services such as Gmail, it does not just concern the United States, it concerns us all.
We should all be happy that Snowden did what he did, and we should at the very least take into serious consideration whether it is possible to give him protection in Norway.
The American whistle-blower says he revealed the top-secret information to give the public an opportunity to understand US surveillance. Having worked for many years for American intelligence services, he gradually became convinced that he was witnessing something that could not be justified.
After initial disclosure in the Guardian that the NSA runs extensive and unprecedented surveillance of both data servers and phones, [German newspaper] Der Spiegel on the weekend revealed that European Union foreign missions in New York and Washington have also been under the watchful eye of the Americans.
In our era, with extensive use of the internet, social media and telephony, it is in principle possible  to get a complete picture of a person's life by means of data collection. When technology no longer sets limit on surveillance, politicians must set limits on technology.
That the US government appears to have decided to waiver that job gives us all a reason to stop and think.
The revelations from the US should also be a wake-up call for our data-privacy debate at home. In recent years, we have seen a trend here in Norway to widen access to personal data. The parliamentary majority has worked for the Data Retention Directive and the expansion of the police's right to conduct surveillance.
It is now time that we ask ourselves if we want to be on the right side of history, and to strengthen the fight for privacy.
Sveinung Rotevatn, head of the youth wing of Norway's Liberal Party (Ung Venstre).
This article was originally published on his blog hosted on the Nettavisen news website.
Editor's note: The Norwegian PEN society announced late on Wednesday that it does not have the right to ask the authorities to review asylum cases unless the person in question is not an author.