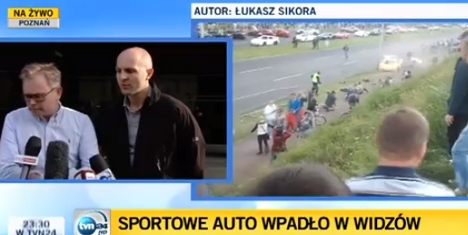 Four of the victims were seriously injured, according to the Wiadomosci newspaper.

The Norwegian driver was detained by Polish police following the incident, with the racing event organizers set to give a press conference on Monday.

Reporting from the scene by the TVN news network

"The drivers started off too quickly, and the driver didn't have any control over the vehicle," reported the Polish television network TVN24.

The yellow car was seen swerving across the tarmac, skidding dangerously close to the barricades at several turns, before the side of the vehicle finally rammed into a tight cluster of racing enthusiasts. The impact saw the victims fly across the pavement.

Images from the aftermath show the injured strewn against a grass bank, with contorted metal barricades visible in the frame, as fellow bystanders rushed to their aid. 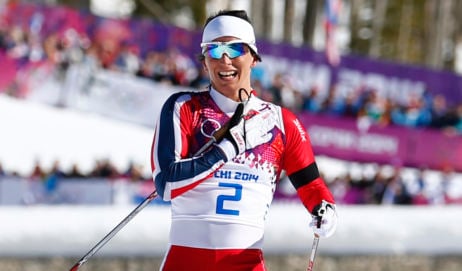 Marit Bjørgen wins an earlier race in the tournament - Heiko Junge/Scanpix
Bjørgen raced with Ingvild Flugstad Østberg in the relay, where teams of two women each perform three alternate sprints.
In a clean sweep for the nordic nations, Norway finished in 16 min 4.05sec, with Finland 9.09sec behind for silver. Sweden took the bronze in 16min 23.82sec.
Bjørgen had already won the skiathlon at Sochi 2014 to go with her three golds from Vancouver 2010.
SHOW COMMENTS
Url copied to clipboard!