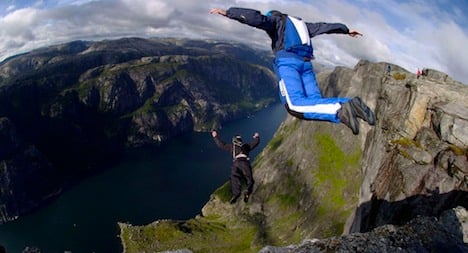 The man took off around noon on Monday and crashed into a cliff face after a very steep flight, the force said.The victim was with two colleagues and took off from a spot on the Mürrenfluh Mountain known as the “Ultimate High”, Bern cantonal police said on Tuesday.

Emergency officials from helicopter operator Air Glacier and the SAC rescue service responded immediately to a call for help but the man was found dead at the foot of a rock wall, according to police.

An inquiry aims to find out what exactly happened.

The fatal accident is at least the 33rd one linked to base jumping in the Lauterbrunnen area since 1994.

A 57-year-old Frenchman died on the Mürrenfluh on February 6th.

The area, close to the Wengen ski resort, is popular with base jumping enthusiasts because of its readily accessible mountain cliffs.

Base jumping is an extreme sport that involves jumping from high spots such as cliffs and buildings using special parachutes designed to break the fall.

Lauterbrunnen has been identified as a high-risk area by the Swiss Base Association, which warns enthusiasts to take precautions while jumping in the valley.